After falling in love with this product at Blogger Bash, we were given the chance to review it and bring some fun ‘learning through play’ activities to you! Sands Alive! Glow by Play Visions is so much fun and easy to use. If you’ve read this blog before, I am a HUGE fan of sensory play. Not only can children learn so much while engaging all of their senses, but it is calming as well 😉 We have played with other types of indoor sand, but this set took the cake because IT GLOWS! With the special glow tools that come in the kit, you can bring this sand into a dark room, or outside at night for a whole other dimension of play. And all of a sudden the money that you spent on the sand goes even further. Giving you two ways to play is like having something new all over again! Sometimes we read glow in the dark and assume, that like a glow stick, it will glow in the dark when you take it outside at night. Just an FYI that is not the case with this sand, you do need some kind of a black light, or the glow tools (included) to make it glow.

For our treasure hunt, we used glass gems to ‘hide’ inside the sand. To work in a counting activity with this as well (why not right?) I used a baking tray with numbered paper squares inside each compartment. 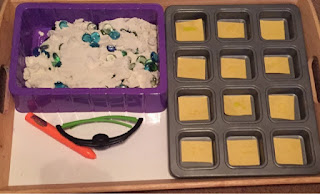 We did this both inside and outside to test out the glow factor, we were not disappointed! 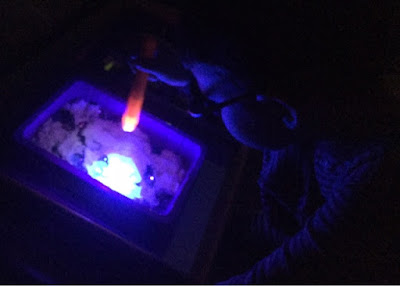 The kit comes with a glow pen, which you can actually doodle on the sand with, kinda cool. We found that the pen worked ‘better’ than the glasses to make the sand glow. The glasses were super fun and felt sciency (I know not a word but you get the idea…) so that was a nice touch, however, the sand didn’t seem to glow quite as brightly with them. We happened to have a glow marker to write the numbers with, but if you don’t have one, a neon marker should glow under the light of the pen or the glasses. It was like a secret code for Mack (4) to solve. 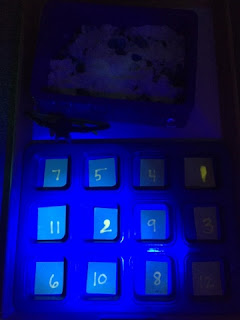 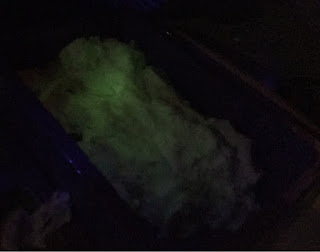 He got to work investigating and playing with the sand, digging out the buried treasure and counting the appropriate amount into the tray. 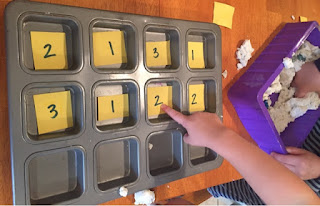 We repeated the same process inside the next day, and my kids had just as much fun working on their counting skills without the glow factor! 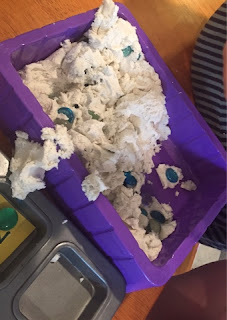 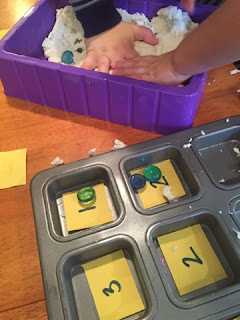 In addition to working on our counting skills, we also made some sensory Mr. Potato Heads and made car tracks and lego prints. There are endless possibilities with your Sands Alive! Glow. 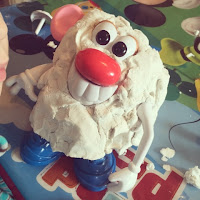 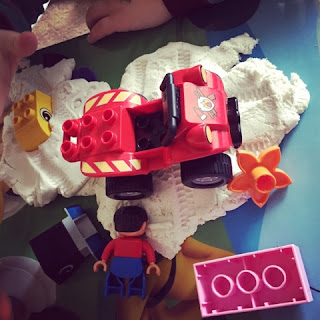