Play Therapy at Home with Puppets on a Stick Rainbow Prancers: Review 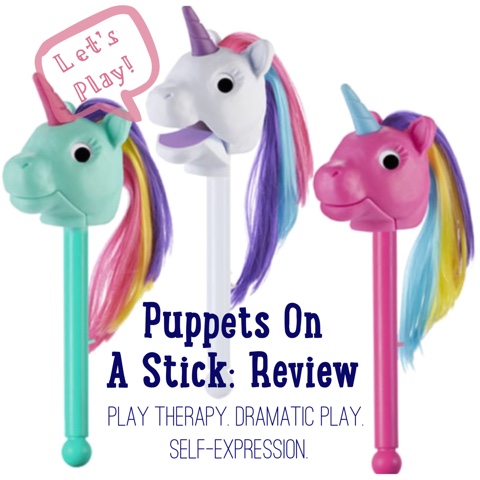 While getting my Masters at NYU in Educational Psychology, I took a course on Play Therapy. In hindsight, it was one of the best classes that I attended and has come in VERY handy with my oldest son (4 years old). He is very cautious and analytical, always weighing his own pros and cons and giving most things quite a bit of thought. He likes to know what is going to happen and thrives on routine (which most kids do I suppose). Because of this, we do A LOT of talking before new or scary experiences. One of the best ways for us to do this is through some at-home ‘play therapy‘. I have made countless sensory bins and sensory baths with themes of upcoming events to provide him with a safe place to ask questions or express concerns. For him, pretending to be someone else gives him enough freedom to really express to me what he is thinking and feeling. When we had the chance to review the Puppets on a Stick: Rainbow Prancers by Educational Insights, it could not have come at a more perfect time. My son was a few days away from a dreaded dental cleaning. The last time we
went to the dentist it was an absolute disaster…you know, the kind where you drag your literally kicking and screaming 3 year old out of the dentist office with every eye in the waiting room glued to you…yep, THAT kind. As soon as we received the Puppets on a Stick in the mail, I knew just what they would be PERFECT for. I told my son that he had a very special something waiting for him in the box, when the beautiful unicorns appeared, they began a conversation about the dentist. My son quickly grabbed one of the unicorns and began expressing all of his concerns with his ‘friends’.  He told them he was afraid of the taste of the toothpaste, and didn’t like the things he had to bite down on for the pictures. The friendly unicorns helped him put his mind at ease, assuring him that if he talked to the dentist they would help him with everything he was hesitant about. And guess what?? Coincidental or not, he went to the dentist a couple of days later, made it through the entire checkup AND x-rays without any issues!! A giant success in my book! Check out a mini clip of our session below.

I wanted to share that story with you to give you an idea of just one of the ways that you can play with these puppets. But in all honesty, they are amazing for so much. My 2 year old LOVES them. We often have long toddler conversations with them, about the colors of toys or what we like to eat. She is really able to express herself through them…and who doesn’t want to know what in the world is going on inside of a toddler’s head?! I love how easy they are for both of my kids to use. There is a little lever on the stick that you push down on to make them ‘talk’. While the official age recommendation is 3+, my 2 and 4 year old can both manage them with ease which I appreciate. It took my 2 year old some practice to be able to use the lever, but as an alternative, she pulled down on the ball at the bottom of the stick, which worked just as well to manipulate the mouth. 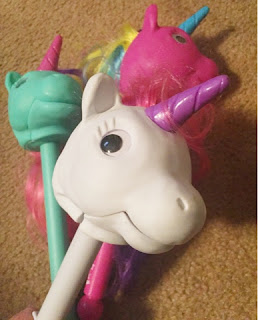 Often times the concept of a toy is much better than the execution, not the case with these. The colors are beautiful, and while ‘girly’, my son has no issue with them (although he does prefer the greenish unicorn to the pink one). Dazzle, Twinkle and Shine come in a pack of three, which I also appreciate because it encourages play and conversation with more than just one other person. In my house, that means there is no fighting over the toy 🙂 And as the name Rainbow Prancers suggest, the hair is beautifully colored, which really attracts my daughter. She has spent a lot of time brushing their hair already {a nice exercise in dramatic play}. 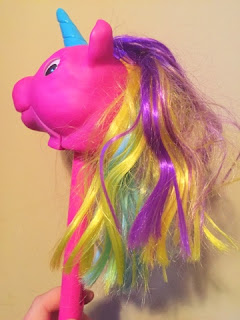 I happen to really like toys that encourage imagination and pretend play as opposed to the push-button type of toy. The puppets-on-a-stick inspire dramatic play and self-expression, all while providing a vehicle for play therapy at home. A win-win in my book. Add these to your Christmas List!
Price: $32.99     Age: 3+
To purchase the set, click here!
Disclaimer: I received the products or services mentioned above for free in the hope that I would mention it on my blog. Regardless, I only recommend products or services I use personally and believe will be good for my readers.